Altan Rio Minerals Limited (Altan Rio) is a West Australian-focused gold exploration company based in West Perth. Altan Rio was first incorporated in the Canadian province of British Columbia, in 2007. Listed on the Toronto Venture exchange in Canada under the symbol TSX-V: AMO, the company's primary focus in Australia is the Southern Cross Greenstone Belt, a gold producing region that has given up more than 12 million ounces.

In 2012, the company was mining in Mongolia, on the Chandman project with Falcon Drilling Mongolia, assayed by Stewart Group, Ulaanbaatar Mongolia, finding gold and copper. At that time, the Company was exploring license holdings around 153,310 hectares (378,873 acres).

Mr Stephen was Co-founder and Executive Director of Crusader Resources Ltd, oversseeing discovery, development and operations of the Brazilian Posse Iron Ore mine. He was previously a founder and Managing Director of Integrated Fuel Services, Western Australia, providing fuel services to mining companies and aviation. He has extensive operational experience in mine site servicing and contracting.

In mid-2019, with unfavourable conditions in Mongolia, Altan Rio assumed control of the northern half of the Frasers-Corinthian Shear Zone in Western Australia.

At the time, CEP Paul Stephen said "The southern portion of this FCSZ has had far more work done on it than the northern portion, but the northern portion certainly hosts some very attractive historical and current mines, and the tenure we have goes right up to the boundaries of all of those mines." He noted that while these are old mines that have been worked extensively, there has been very little drilling below 50metres. 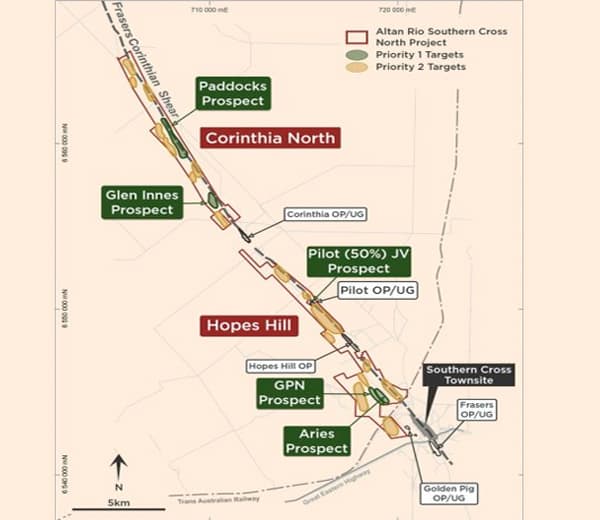 In September 2019, Altan Rio signed an agreement with private Australian company, Surveyor Resources Pty. Ltd. to acquire 80% of the Southern Cross North Project, that was 100% owned by Surveyor. This area is on Crown and Freehold land, and at the time of the agreement, there had been no native title claims on the land.

In March 2020, the company delisted from the TSX Venture exchange, moving to the NSX withe symbol AMO.H.

In October 2020, the TSX listing was reactivated as well as closing an additional private placement of C$1.5 million. The proceeds of the private placement are to be used for advancement of the Southern Cross operations and creditor payments.

In 2021, Altan Rio Minerals Limited has an alliance with Barto Gold Mining Pty Ltd in the Southern Cross Greenstone Belt, WA. They recently completed a ten RC drillhole program. The area is known for its old underground mining. This operation is at Corinthia North and in the same field, Hopes Hill, just to the the south east. Barto Gold owns the Marvel Loch milling facility nearby the drilling area. Barto Gold is Chinese-backed.

Speaking about this drilling, which is in the Frasers-Corinthian Shear Zone, Altan Rio CEO Mr Paul Stephen noted that "We have been able to intersect and confirm the position of the mineralised structure in our first drilling campaign, the interpreted continuity of high-grade mineralisation from the base of the current open pit to these intercepts is a very positive indicator for expansion of the open pit." Mr. Stephen said the drilling identified the potential for additional ore to be discovered parallel to and below the main structure.